The Sandman Vol. 5: A Game of You 30th Anniversary Edition (Paperback) 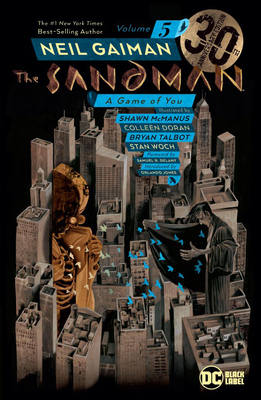 One of the most popular and critically acclaimed graphic novels of all time, Neil Gaiman’s award-winning masterpiece THE SANDMAN has set the standard for mature, lyrical fantasy in the modern comics era. Illustrated by an exemplary selection of the medium’s most gifted artists, the series is a rich blend of modern and ancient mythology into which contemporary fiction, historical drama, and legend are seamlessly interwoven.

In A GAME OF YOU, the imagined landscapes of childhood are transformed into the battleground for a deadly contest of wills. As cracks appear in the wall that separates the waking world from the Dreaming, a group of young New Yorkers is drawn inexorably through the gaps into a long-forgotten corner of the Dream King's realm—a setting that is both eerily familiar and disturbingly malignant.

“Neil Gaiman is, simply put, a treasure house of story, and we are lucky to have him in any medium.” —Stephen King

“Among the few comics writers that critics point to as having transcended the genre and created something new and vital.” —The San Francisco Examiner

“If The Sandman isn’t the greatest comic of the century, it is good enough to demand to be judged by those standards.” —The Independent