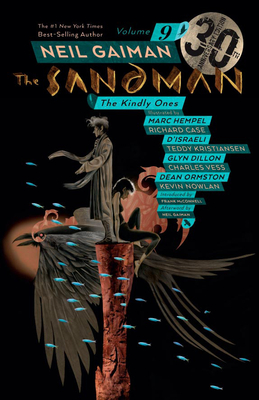 In the longest Sandman story, Morpheus becomes the prey of the Furies--avenging spirits who torment those who spill family blood. A journey both begins and ends for the Lord of Dreams as threads and pieces building since the beginning of the series finally come together in a thrilling climax that forever changes the world of The Sandman.

One of the most popular and critically acclaimed graphic novels of all time, Neil Gaiman's award-winning masterpiece The Sandman set the standard for mature, lyrical fantasy in the modern comics era. Illustrated by an exemplary selection of the medium's most gifted artists, the series is a rich blend of modern and ancient mythology in which contemporary fiction, historical drama and legend are seamlessly interwoven.

The Kindly Ones have many names: The Erinyes. The Eumenides. The Dirae. The Furies. Agents of vengeance, implacable and unstoppable, they do not rest until the crimes they seek to punish are washed clean with blood. It is to them Lyta Hall turns when her baby, Daniel, is taken from her, and it is Dream of the Endless who becomes their target. But behind a mother's grief and unyielding rage, there are darker forces at work, and what they set in motion will eventually demand a sacrifice greater than any the Dreaming has yet known.

"The greatest epic in the history of comic books." —The Los Angeles Times Magazine

"One of the few comics that segued from the comics crowd, entering the intellectual and art worlds, winning over a large non-comics-reading audience." —The Hollywood Reporter

"The Sandman is a modern myth, as well as a precis on why the stories we tell matter so much." —Playboy