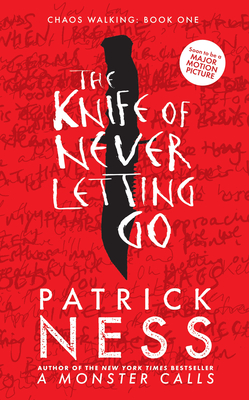 This is book number 1 in the Chaos Walking series.

A decade after its release, the astonishing opener to Patrick Ness’s Chaos Walking trilogy still resonates. Celebrate ten years of this groundbreaking book with a beautiful anniversary hardcover edition.

Todd Hewitt is the only boy in a town of men. Ever since the settlers were infected with the Noise germ, Todd can hear everything the men think, and they can hear everything he thinks. Todd is just a month away from becoming a man, but in the midst of the cacophony, he knows that the town is hiding something from him — something so awful that Todd is forced to flee with only his dog, whose simple, loyal voice he hears too. With hostile men from the town in pursuit, the two stumble upon a strange and eerily silent creature: a girl. Who is she? Why wasn't she killed by the germ like all the other females on New World? Propelled by Todd's gritty narration, readers are in for a white-knuckle journey in which a boy on the cusp of manhood must unlearn everything he knows in order to figure out who he truly is.

Patrick Ness is the author of the critically acclaimed and best-selling Chaos Walking trilogy, as well as the Carnegie Medal–winning A Monster Calls, inspired by an idea from Siobhan Dowd. Among the numerous awards he has received are the Guardian Children’s Fiction Prize, the Booktrust Teenage Prize, and the Costa Children’s Book Award. Born in Virginia, he lives in London.

Crack dramatic and comic timing… unforgettable… penetrating… The cliffhanger ending is as effective as a shot to the gut.
—Booklist (starred review)

The emotional, physical, and intellectual drama is well crafted and relentless...Tension [and] suspense…are palpable throughout, mitigated by occasional moments of welcome humor.
—School Library Journal

Todd’s world is a fascinating one, and the psychological and sociological impact of being unable to shut out others’ thoughts—or hide your own—is creatively explored … Todd’s colloquial voice is by turns defensive, belligerent, innocent, and desperate; the strength of his point of view and the subtle world-building contained in it make this series opener as promising as it is provocative.
—The Horn Book

Todd and Viola…are realistically portrayed as kids frequently overwhelmed and terrified by their circumstances…The nicely balanced mix of coming-of-age novel, science-fiction adventure, and dystopic thriller will make this an appealing choice for a range of genre readers…still unsolved mysteries, carefully developed by Ness and left at tantalizing moments of resolution, guarantee anticipation for the next two.
—The Bulletin of the Center for Children’s Books

Gives us a glimpse of the depth of evil in our hearts…the ending of this book is absolutely chilling and leaves the reader begging for more.
—Library Media Connection

This riveting SF thriller is action-packed, with edge-of-your-seat chase scenes, a monstrous villain who just won’t die, and moments of both anguish and triumph…Emotionally intense…haunting page-turner.
—KLIATT

A read-alone, stay-up-way-too-late book for older readers looking for the combination of being scared and being stirred to gallop to the end.
—Chicago Tribune

Filled with action, this title will definitely be pleasing to those loving dystopian novels or just looking for a good, if not a tad bit strange, adventure.
—A Patchwork of Books