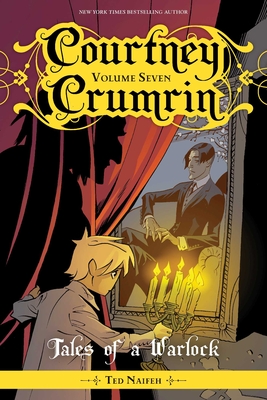 This is book number 7 in the Courtney Crumrin series.

Aloysius Crumrin may be a warlock, but that doesn't mean he's sympathetic to others of his kind—especially when they step outside the bounds of Ravenna's Law and take their magic to dangerous heights. Working for lawyer and magic connoisseur Horace Crisp gives Aloysius the chance to track down these rogue witches and warlocks and strip them of their power. He just needs to keep his own magical ancestry—and powers—to himself.

But he doesn't count on Alice Crisp, Horace's tenacious daughter, accompanying him on missions, or on trusting her with his secret. And he doesn't count on falling in love... which proves more dangerous than anything when Horace gets his own taste of the power magic wields.

Ted Naifeh first appeared in the independent comics scene in 1999 as the artist for Gloomcookie, the goth romance comic he co-created with Serena Valentino for SLG Publishing. After a successful run, Ted decided to strike out on his own, writing and drawing Courtney Crumrin and the Night Things, a spooky children’s fantasy series about a grumpy little girl and her adventures with her Warlock uncle. Nominated for an Eisner Award for best limited series, Courtney Crumrin’s success paved the way for Polly and the Pirates, another children’s book, this time about a prim and proper girl kidnapped by pirates convinced she was the daughter of their long-lost queen. Over the next few years, Ted wrote four volumes of Courtney Crumrin, plus a spin off book about her uncle. He also co-created How Loathsome with Tristan Crane, and illustrated two volumes of the videogame tie-in comic Death Junior with screenwriter Gary Whitta. More recently, he illustrated The Good Neighbors, a three volume graphic novel series written by New York Times best-selling author Holly Black, published by Scholastic. In 2011, Ted wrote the sequel to Polly and the Pirates, and illustrated several Batman short stories for DC Comics. In 2012, to celebrate the 10th anniversary of Courtney Crumrin, he wrote and illustrated the final two volumes of the series. Currently, you can find Ted everywhere: from the pages of Batman ‘66 to his newest original series for adults, Night’s Dominion. Ted lives in San Francisco, because he likes dreary weather.