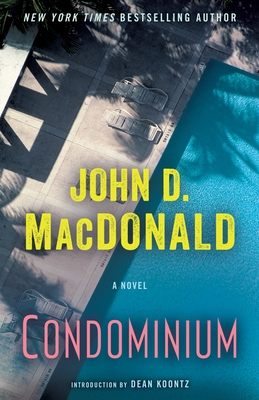 A “first-rate entertainment” (New York Daily News), Condominium is a panoramic novel from a master of suspense that follows the disappearance of an American paradise, the corrupt souls willing to sell out to make a buck, the innocent masses caught in their wake—and the perfect storm that washes everything away.

Welcome to Florida’s Golden Sands, the dream condominium complex built on a weak foundation and a thousand dirty secrets. The real estate was a steal—literally. The maintenance charges run high as the locals are run out. It’s the home of shortcuts, crackdowns, breakups, oversights, and payoffs.

Add it all up, and the new coastline community doesn’t stand a chance against the ever-present specter of disaster: the dreaded hurricane. The big one is coming. Golden Sands is right in its path. And only a few brave souls have the power to stop this towering eyesore from going underwater for good.

“Most readers loved John D. MacDonald’s work because he told a rip-roaring yarn. I loved it because he was the first modern writer to nail Florida dead-center, to capture all its languid sleaze, racy sense of promise, and breath-grabbing beauty.”—Carl Hiaasen

“A narrative of wracking suspense that mounts to a devastating climax.”—Cosmopolitan

“John D. MacDonald created a staggering quantity of wonderful books, each rich with characterization, suspense, and an almost intoxicating sense of place.”—Jonathan Kellerman

John D. MacDonald was an American novelist and short-story writer. His works include the Travis McGee series and the novel The Executioners, which was adapted into the film Cape Fear. In 1962 MacDonald was named a Grand Master of the Mystery Writers of America; in 1980, he won a National Book Award. In print he delighted in smashing the bad guys, deflating the pompous, and exposing the venal. In life, he was a truly empathetic man; his friends, family, and colleagues found him to be loyal, generous, and practical. In business, he was fastidiously ethical. About being a writer, he once expressed with gleeful astonishment, “They pay me to do this! They don’t realize, I would pay them.” He spent the later part of his life in Florida with his wife and son. He died in 1986.

“The great entertainer of our age, and a mesmerizing storyteller.”—Stephen King

“My favorite novelist of all time . . . All I ever wanted was to touch readers as powerfully as John D. MacDonald touched me. No price could be placed on the enormous pleasure that his books have given me. He captured the mood and the spirit of his times more accurately, more hauntingly, than any ‘literature’ writer—yet managed always to tell a thunderingly good, intensely suspenseful tale.”—Dean Koontz

“To diggers a thousand years from now, the works of John D. MacDonald would be a treasure on the order of the tomb of Tutankhamen.”—Kurt Vonnegut

“A master storyteller, a masterful suspense writer . . . John D. MacDonald is a shining example for all of us in the field. Talk about the best.”—Mary Higgins Clark

“The consummate pro, a master storyteller and witty observer . . . John D. MacDonald created a staggering quantity of wonderful books, each rich with characterization, suspense, and an almost intoxicating sense of place.”—Jonathan Kellerman

“There’s only one thing as good as reading a John D. MacDonald novel: reading it again. A writer way ahead of his time, he is the all-time master of the American mystery novel.”—John Saul