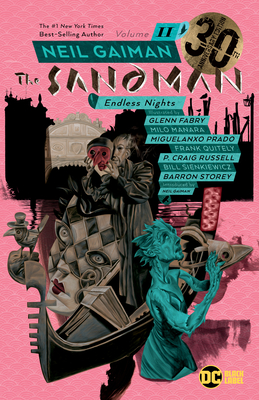 One of the most popular and critically acclaimed graphic novels of all time, Neil Gaiman's award-winning masterpiece The Sandman set the standard for mature, lyrical fantasy in the modern comics era. Illustrated by an exemplary selection of the medium's most gifted artists, the series is a rich blend of modern and ancient mythology in which contemporary fiction, historical drama, and legend are seamlessly interwoven.

Neil Gaiman is the New York Times best-selling author of the Newbery Medal winning The Graveyard Book and Coraline, the basis for the hit movie. His other books include Ananasi Boys, Neverwhere, American Gods and Stardust(winner of the American Library Association's Alex Award as one of 2000's top novels for young adults) and the short story collections M is for Magic and Smoke and Mirrors. He is also the author of The Wolves in the Walls and The Day I Traded My Dad for Two Goldfish, both written for children. Among his many awards are the Eisner, the Hugo, the Nebula, the World Fantasy and the Bram Stoker. Originally from England, he now lives in the United States.

"What Gaiman has written is a comics masterpiece, a book that, in its seven tales, one devoted each of the Endless, each illustrated by a different artist, demonstrates the enormous range of the comics medium both in content and style." --Publishers Weekly

"Everything his fans could have hoped for." --Booklist

"Endless Nights both delivers on the high expectations of longtime readers and surprise with its millennium-spanning variety." --Village Voice