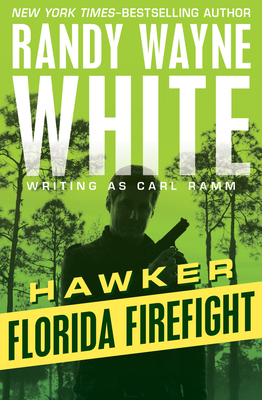 This is book number 1 in the Hawker series.

A disgraced Chicago cop launches a one-man war against organized crime in this novel by the New York Times-bestselling author of the Doc Ford series. A man holds twelve children hostage at gunpoint. Across the street, James Hawker dangles from a skyscraper, watching the terrorist through a sniper's scope. Hawker has a shot, and he wants to take it, but the police brass say no. By the time he gets permission, it will be far too late. The terrorist opens fire, killing two of the children before Hawker can take him out. When the smoke clears, the madman is dead, and Hawker's career is toast. No longer a cop, he's about to become America's deadliest defender. The father of one of the murdered children hires Hawker as a private vigilante, and gives him an unlimited bankroll to wage a nationwide fight against organized crime. The first battle will be fought in Florida, where drug smugglers have taken root like a cancer--and Hawker will have to cut them out. From the author of Mangrove Lightning and the Hannah Smith series, who "raises the bar of the action thriller," this is a hard-charging story of one man's quest for justice (The Miami Herald). Florida Firefight is the 1st book in the Hawker series, but you may enjoy reading the series in any order.

Randy Wayne White was born in Ashland, Ohio, in 1950. Best known for his series featuring retired NSA agent Doc Ford, he has published over twenty crime fiction and nonfiction adventure books. White began writing fiction while working as a fishing guide in Florida, where most of his books are set. His earlier writings include the Hawker series, which he published under the pen name Carl Ramm. White has received several awards for his fiction, and his novels have been featured on the New York Times bestseller list. He was a monthly columnist for Outside magazine and has contributed to several other publications, as well as lectured throughout the United States and travelled extensively. White currently lives on Pine Island in South Florida, and remains an active member of the community through his involvement with local civic affairs as well as the restaurant Doc Ford's Sanibel Rum Bar and Grill.