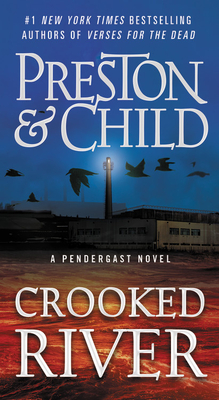 This is book number 19 in the Agent Pendergast Series series.

From the #1 New York Times bestselling authors: Racing to uncover the mystery of several severed feet found floating in the Gulf of Mexico, Agent Pendergast is faced with the most inexplicable challenge of his career.

A startling crime with dozens of victims. Appearing out of nowhere to horrify the quiet resort town of Sanibel Island, Florida, dozens of identical, ordinary-looking shoes float in on the tide and are washed up on the tropical beach—each one with a crudely severed human foot inside.

A ghastly enigma with no apparent solution. Called away from vacation elsewhere in the state, Agent Pendergast reluctantly agrees to visit the crime scene—and, despite himself, is quickly drawn in by the incomprehensible puzzle. An early pathology report only adds to the mystery. With an ocean of possibilities confronting the investigation, no one is sure what happened, why, or from where the feet originated. And they desperately need to know: are the victims still alive?

A worthy challenge for a brilliant mind. In short order, Pendergast finds himself facing the most complex and inexplicable challenge of his career: a tangled thread of evidence that spans seas and traverses continents, connected to one of the most baffling mysteries in modern medical science. Through shocking twists and turns, all trails lead back to a powerful adversary with a sadistic agenda and who—in a cruel irony—ultimately sees in Pendergast the ideal subject for their malevolent research.

The thrillers of Douglas Preston and Lincoln Child "stand head and shoulders above their rivals" (Publishers Weekly). Preston & Child's Relic and The Cabinet of Curiosities were chosen by readers in a National Public Radio poll as being among the one hundred greatest thrillers ever written, and Relic was made into a number-one box office hit movie. They are coauthors of the famed Pendergast series, and their recent novels include Verses for the Dead, City of Endless Night, The Obsidian Chamber, and Blue Labyrinth. In addition to his novels and nonfiction works (such as The Lost City of the Monkey God), Preston writes about archaeology for the New Yorker and National Geographic magazines. Lincoln Child is a Florida resident and former book editor who has published seven novels of his own, including such bestsellers as, Full Wolf Moon and Deep Storm.

"[An] action-filled adventure [...] There is plenty of suspense, and the action gets bloody. Great storytelling, a quirky hero, and a quirkier plot make this a winner for adventure fans."—Kirkus

"Preston and Child know how to craft compelling stories that are both baffling and surprising. The cast of characters feels authentic and moves the story forward in unexpected ways.... the authors are masters of the procedural with a gothic flair."—p.p1 {margin: 0.0px 0.0px 0.0px 0.0px; font: 11.0px Helvetica}span.s1 {font-kerning: none}Associated Press

"[Pendergast] still remains the most charming, intelligent, cool, and creepy agent ever written...Read this. As fast as possible. Preston & Child have once again created the unimaginable and you just can't miss it!"—Suspense Magazine

"Agent Pendergast is back and better than ever."—The Real Book Spy

"Red herrings and dead ends abound in this especially intricately plotted entry in the Pendergast series, which is also noteworthy (as usual) for its finely drawn characters and its writing style, which overlays contemporary storytelling with a light ornate flavoring."—Booklist

"CROOKED RIVER is worth the price of admission, and Preston & Child find themselves with another surefire hit on their hands."—p.p1 {margin: 0.0px 0.0px 0.0px 0.0px; font: 12.0px 'Times New Roman'}Bookreporter

Praise for VERSES FOR THE DEAD
"Multifaceted and complex. Legendary. Working together, Preston and Child are masters at crafting a story that goes beyond a simple mystery or thriller. . . Readers unfamiliar with Pendergast will find this novel a fantastic launch point. He's a modern-day Sherlock Holmes, and the story reads like classic literature."—Associated Press

"Doug Preston and Lincoln Child's master detective A.X.L. Pendergast is every bit the modern equivalent of Sherlock Holmes and Hercule Poirot. And his investigative skills have never been sharper than in the altogether brilliant Verses for the Dead. . . A throwback to classic crime fiction while maintaining a sharp, postmodern edge."—Providence Journal